You recognize the situation. Someone is arguing for something - maybe on the internet, maybe in the break room, maybe even at the family party - but is obviously completely wrong. Finds something offensive. Have completely misunderstood how something works. Or draws mind-boggling conclusions that defy all sense and logic. And there you are. The last outpost of knowledge and reason. Someone has to object! Sometimes you feel like the chosen one who has to do it. As if you have a responsibility to manage the discussion and clear up misunderstandings and inaccuracies. When you see unsubstantiated claims, you don't want to let them go unchallenged. You don't want to give a walkover.

In the past, I was often urged to join the discussions, but it is draining. It's also quite thankless - it's not that common for an internet discussion to end with the other party acknowledging the greatness of one's argument and changing their mind, I've noticed.

Nowadays, I more often manage to let go of the impulse to get involved in the conflicts. I also feel better. To the extent that I give the walkover, so be it, because while it is important to get the world on a more reasonable course, it is also important to nurture my mood.

Irrational to attack all discussions

It is also rather irrational to take part in all discussions. The only discussions worth having are those where you could potentially shift someone's perception, and that probably only happens in the fraction of cases where you didn't think radically differently from the start and both parties are reasonably open and curious. So precisely those who least provoke one to contradict. Of course, one may also want to object out of concern for the less invested who follow the debate from the sidelines. Maybe your post can prevent them from being misled by inaccuracies? The problem is that the reply itself gives greater spread to the original post, so the risk is that you are just giving the foolishness a platform.

Most debaters are not looking to weigh the pros and cons to get closer to the truth, they have already made up their minds and rather want to preach their message, mark which ingroup they belong to, and distance themselves from the corresponding outgroup. Of course, it feels good to make an eloquent, rhetorically skilled post, with impeccable logic and cited sources to support what you say. Which puts that little shit in his place. Then it feels like you won. The problem is that it never works.

Although, the satisfaction of having conquered one's counterpart has no connection with getting them to change their mind. Rather, it leads to a psychological backlash known as the backfire effect, where you are pushed deeper into your misconception the heavier the rebuttal that is pushed on you.

The economist F.A. Hayek noted that people hold their opinions as their dearest possessions, and therefore experience it as theft to allow themselves to be persuaded. No, you change your mind quietly, over time, and on your own, not because you are run over by a bulldozer of logic that storms the crap out of you. More effective is asking open-ended questions, which at least sometimes sow a seed of inner reflection that days or weeks later can grow into a new thought.

Nevertheless, we are so persistent in treating discussion and debate as some kind of mud wrestling where everyone gets dirty and no one becomes wiser, that we have built entire social media (Twitter!) and evening TV formats with the verbal entertainment violence as the foundational idea.

That's how we work. That is also how the media logic works.

Consider that thousands of researchers jointly published their conclusions on an important issue in a report. Not all researchers agree on all the details, there is a range in the conclusions that can be drawn, but there is still a consensus. There is no conflict. Good, but from a media perspective also incredibly boring. Nothing that engages. It doesn't drive any clicks and it rarely even ends up in the newspaper.

In order to create engaging content in such a situation, the news factories must ignore the broad consensus and look outside, finding a counter perspective that can take on the role of challenger. It's not difficult, because almost every imaginable opinion seems to be represented by some disembodied voice who is happy to receive free attention from the media. It is dishonest to the news consumers. But it engages.

The alternative idea is often presented by someone with an impressive title such as "researcher" or "professor". Not necessarily within something that is relevant to the subject - but which still gives a reasonably credible impression to those who are not familiar with the details. Within what is said that is expertise or what is ideologically motivated conviction becomes difficult for a layman to distinguish, especially since the ideological often takes the form of the expert presenting factually correct information but where some important factor is omitted or downplayed. We are tricked into thinking that there is a meaningful line of conflict between the large research collective where everyone largely agrees and the questioning minority. The fact is that the stated purpose of SVT's debate effort Sweden meets is to "actively bring together people with strongly polarized views on controversial issues".

In statistics, such individual, solitary deviations are called outliers and are removed to obtain more robust data. You simply clean out the weirdos. In news journalism, instead, they call them independent experts and invite them to the debate segment of the late-night broadcast with their sworn enemy so that they can take honor and glory from each other in two intense minutes of bar fight television. It's popcorn-friendly but gives a very skewed view of reality.

The good, fruitful conversation would arise between the humble in the middle who complement each other's perspectives. Instead, we get the extremes who disagree on everything. Knowledge reduced to gladiatorial games. Perhaps we are entertained by such a scheme, but we are hardly informed.

The news sets up conflicts where the parties are far apart because then the contradiction becomes easy to discern - even if it is not meaningful or true. They need easy-to-grasp caricatures, just like the traveling theater companies of yore that drew audience recognition with a given gallery of characters who returned play after play, in the same gaudy costumes, and with the same one-dimensional drives. The news needs the cartoons for the same reason. Just like theater companies, the focus of the news never stays in the same place for long. New complex issues emerge and must be described, news cycle by news cycle, and in order for the audience not to get lost in all the technicalities, at least the narrative dynamics must follow a template. Of polarization. A template we recognize very well. And that engages.

The fierce debates are not free

As the news loves to portray the world in terms of conflict, it also creates new conflicts where none should exist. A neutral report engages less. A report that threatens someone's perspective engages all the more - precisely because no one wants to give the walkover. The reader feels urged to enter the conflict himself, enlists as a foot soldier in the comment section - and without realizing it himself becomes a game piece for the publicists' "commitment". Some use the dissenting voice as a welcome weapon to jab at someone they dislike politically. Others are provoked by the fact that the extreme perspective is given space at all and enters the opposite side of the debate. It is commented on, shared, and raved about. The article created engagement, the editors note: more of that!

We end up wasting time and mental capacity ranting at each other from separate trenches (which the news producers have kindly dug for us) and throwing our respective news stories and outlier expert references at each other like hot air hand grenades. It gets as constructive as arguing whether AIK or Djurgården is really the best. NATO or neutrality? Nuclear power or wind power? There is an expert for every opinion. Choose your fighter. Get in the trenches.

It has been shown that when politics are perceived as conflicts rather than joint problem solving, those who dislike conflicts begin to avoid politics, while those who are conflict-oriented seek it out. Painting discussion as conflicts thus becomes self-fulfilling.

Imagine if we really aren't that at odds

It seems like there's trouble almost everywhere these days. Take a trip to Twitter and check the tone there. But what if we're not really that at odds? What if the majority just don't want to give a walkover in the conflicts created by the media? Twitter may be in flames, but the fuel is largely news articles with party submissions that are far from the broad consensus in each area. Journalism needs to take greater responsibility for this, and both check and declare how the weight of opinion is distributed within the field instead of just chasing spectacular quotes that make people react. Simply clean out the outliers, and stop playing such over-the-top theater of effects. We news consumers must also take greater responsibility. Every time we click on headlines, share just to show how wrong someone is or engage in troll discussions based on trashy articles, we are rewarding the content. No wonder the newsrooms give us bad journalism if we readers reward it over and over again.

In order to find ways forward, we need more common perspectives and bridging of opinions, and then we need to at least try to shut up the stupid things and sit on our hands instead of starting to point fingers at what is provoking. Even though someone is wrong. Maybe most importantly when someone is extremely wrong. So as not to contribute to the avalanche of outrage and counter-outrage that drowns out the constructive conversation that is still going on out there, somewhere. And so as not to perish as unknown soldiers in the trenches of the news, in pointless conflicts where everyone is a victim.

The constructed opinion war can be opted out of

Despite the trenches, we live in a world that is developing very well in many areas, but of course, there is more to do. More to improve. For that, action and knowledge are needed. The news purports to inform, but it does not. Their made-up conflicts make us less actionable and less informed. There is plenty of relevant knowledge and good conversation, and if we let the news noise die down, it becomes easier to find real knowledge elsewhere. If you don't want to skip the news altogether, you can at least gain a lot by paying more attention to how you consume news and what you reward with your clicks. The contrived war of opinion is fought by volunteers. It is possible to opt-out.

Written by Tobias Wahlqvist and Tomas Söderlund, who are behind the book SKIPPA NYHETERNA with the thesis that the news is simplified, speculative, and stressful fairy tales that not only give an incorrect picture of the world but also make us depressed, pessimistic, and afraid. 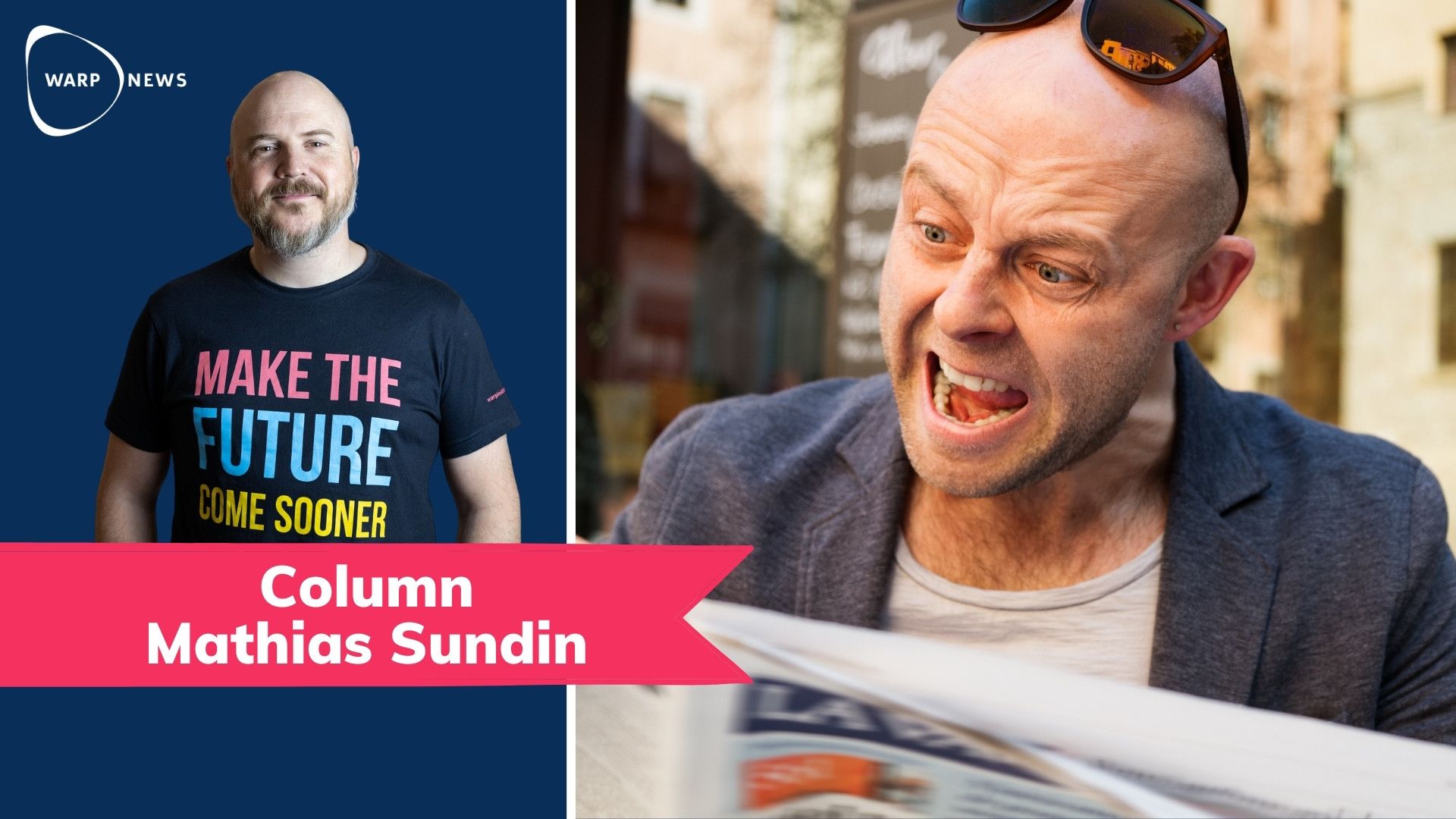 Sorry about the angry headline, but I'm just following the trend. Over the last 20 years headlines in news media have turned more and more negative and angry. 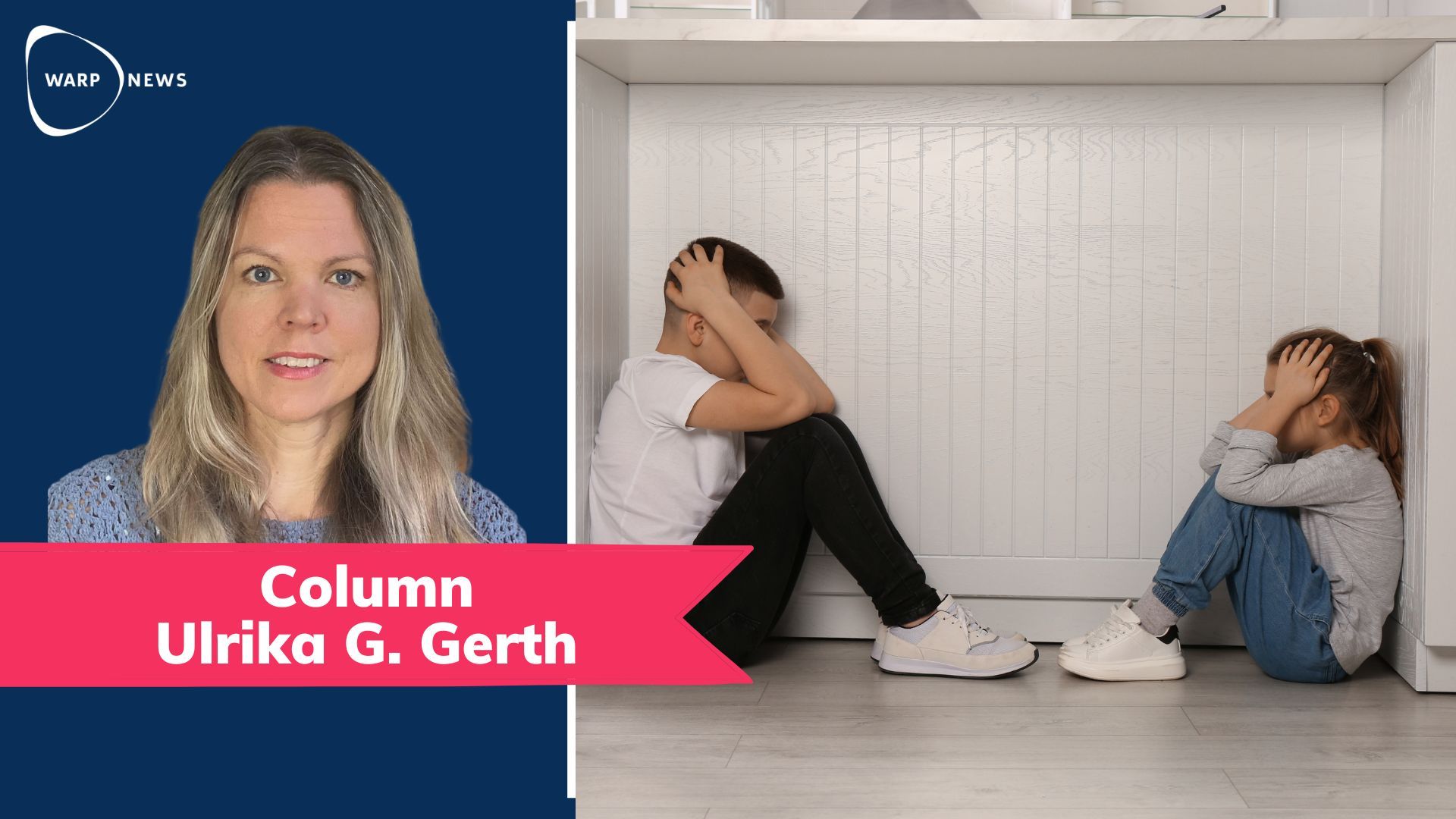 "A millennial couple recounting how they wrestled for a decade (!) with the “ethical quandary” of whether to bring “another human onto an already crowded planet.” (she wanted to raise a “climate ally,” he feared for the child’s future)," writes Ulrika G. Gerth 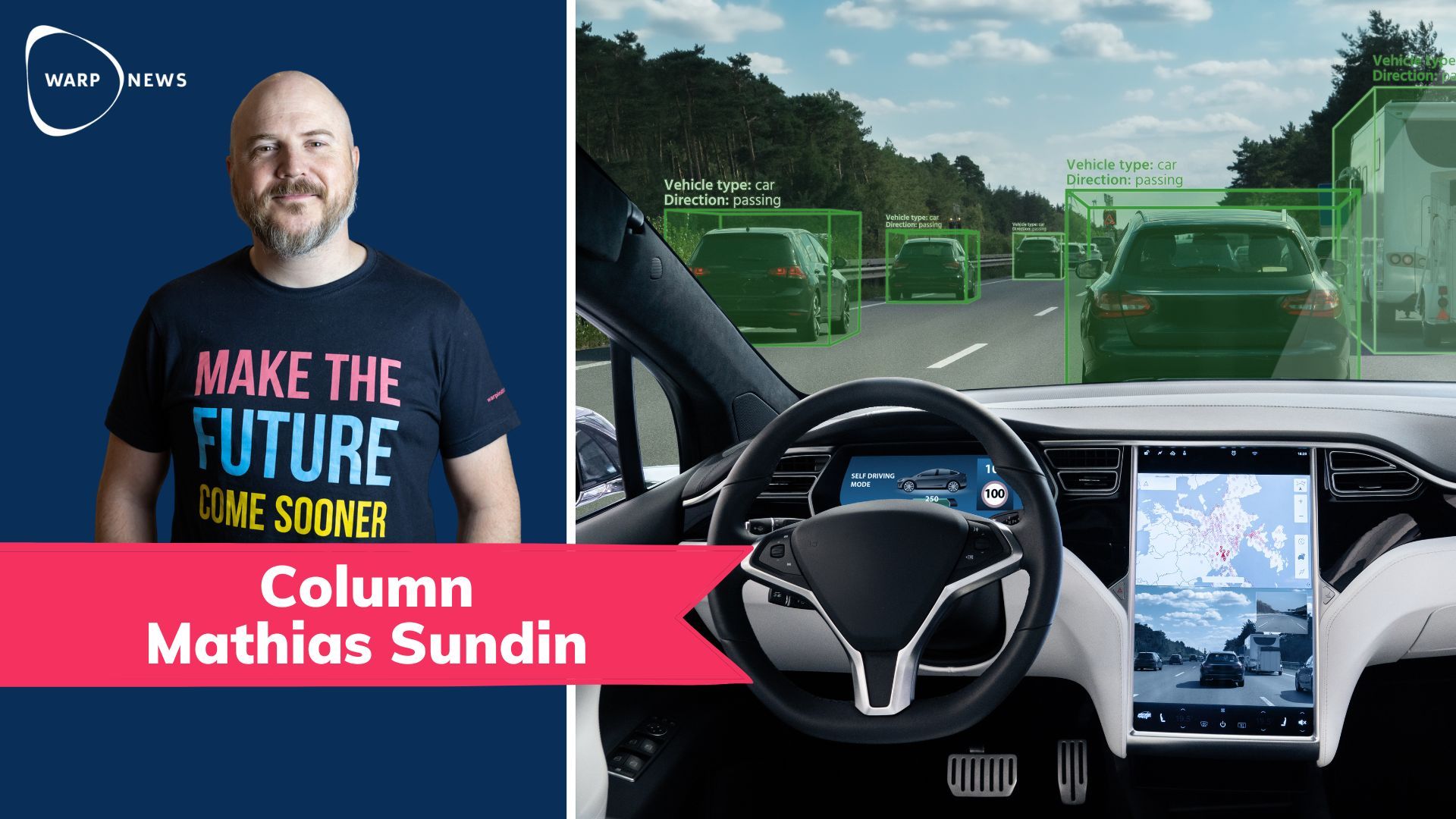 Negative headlines and pessimism are now trying to fool us that full self-driving is not happening anytime soon. That is wrong.